India – “Be Peacemakers”: a call to cultivate and care for God’s Creation 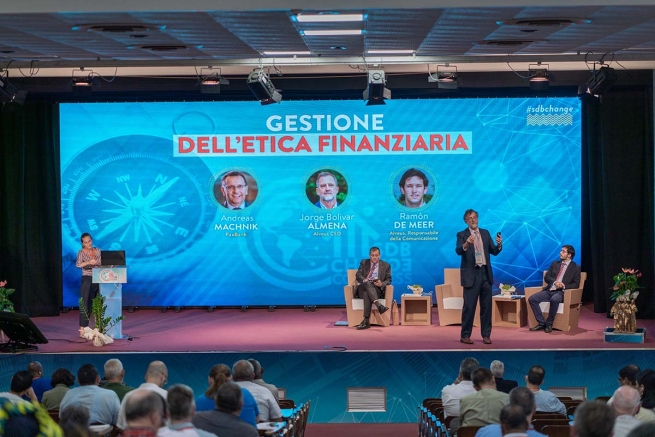 (ANS – Rome) – On Wednesday, September 21, the SDB Change Congress reached its halfway point. Economers, Heads of Planning and Development Offices (PDOs), Mission Offices, and Salesian and international NGOs were able to hear insights and reflections on how to improve their ministry for the benefit of young people through a more effective structuring of their activities.

Next came Nelson Penedo, Director General of “Don Bosco Mission Bonn,” the Salesian Mission Office of the German Province (GER), who with an impassioned report both described the evils and opportunities lost to corruption and pointed out all the virtuous behaviors to be promoted.

The afternoon then continued with a session aimed at learning more about the reality of ethical finance management and highlighting current options for rethinking finance from a more human and Christian perspective. Keynote speakers were Andreas Machnik, of “PaxBank,” who remarked on the importance of proper financial conduct on the part of every church institution; and Jorge Bolivar Almela and Ramón de Meer, CEO and Communications Manager, respectively, of Alveus, an Investment Manager that proposes an approach focused on transparency, efficiency, ethics, and respect for the mission and core values of each entity.

Then, in the last part of the hall proceedings, Filipp Lammens, Director General of the Belgian Salesian NGO “VIA Don Bosco,” and Fr. Thomas Pallithanam SDB, Salesian Congregation Representative to the United Nations, addressed the emerging issues of digital currencies in the areas of development and cryptocurrencies and blockchain, while illustrating the opportunities and risks that are inherent in these areas of economic activity.

Finally, the day was rounded off with a visit to the Salesian Basilica dedicated to Don Bosco in the Roman neighborhood of Cinecittà, the Eucharist presided over by Fr. Victore Auguste, Economer of the “Blessed Philip Rinaldi” Vice-Province of Haiti (HAI), and the evening agape.

As repeatedly underscored by the General Economer and promoter of the congress, Br. Jean Paul Muller, in fact, the activities of this event do not end with only the reports and speeches of the invited speakers, but also continue in the informal exchanges and spontaneous dialogue that the approximately 250 participants carry on during breaks: useful times to get to know each other, share opportunities and problems, moments to form, expand, forge synergies and networks.