Read more
Last News
> Italy – Don Bosco returns to the boys' prison
> Democratic Republic of Congo – Pope Francis recalls: the future is in the hands of young people
> Italy – "Such a big church" for such a "big thing". Card. Parolin at "Don Bosco" in Rome
> Sri Lanka – More than 6,000 people receive rice-meal donation
> RMG – Canonically erected, new Province of Tanzania (TZA)
> Italy – Meeting of Consultation Body for Missions Sector
> Vatican – Validity of Diocesan Inquiry into Cause of Servant of God Giuseppe Cognata
> RMG – Digital Health: a series of meetings to explore how to educate young people in self-regulation and responsible use of technology
> Philippines – DBYC-Lawaan Youth Vigil 2023: a time to reflect on decisions opportunities and changes
> Portugal – At work for IX International Congress of Mary Help of Christians: "I will give you the teacher" 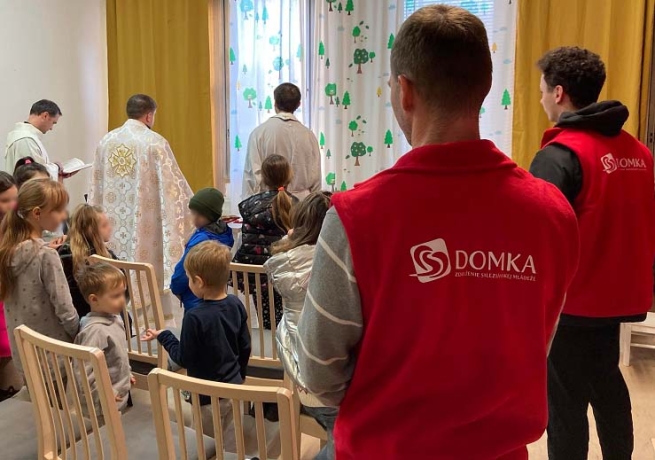 (ANS – Bratislava) – Already 11 months have passed since that terrible February 24, 2022, when the war in Ukraine began. In the rushing whirlwind of events and their communication, the images of the many Ukrainians fleeing to Western European countries have now become almost faded, the war that was supposed to be swift has become positional and attritional, and while entire Ukrainian towns and cities have become scorched earth, millions of Ukrainian citizens – mostly women, the elderly and children – continue to live outside their homeland. The Salesians of Slovakia have been at their side since the first hours of the beginning of the conflict, taking in orphaned and needy minors from Lviv from the very beginning, and then opening their doors to as many people as possible. And despite the passage of time and all the difficulties that a sustained and enduring effort entails, they still continue to care for them today.

As always, the commitment of the Sons of Don Bosco has been multifaceted: from covering basic needs – food, shelter, medical care – to services projected toward the future, such as education for the youngest children and language courses for adults, so that they can become as self-sufficient as possible and find work with which to support themselves.

But the psychological and relational aspect of the refugees has never been overlooked either. For example, during this winter time, efforts have continued to bring some joy and recreation to the minors from the family-home of Lviv who remained in Slovakia. These minors are the youngest of the original group of 47 orphaned children, boys and girls who rushed out of Lviv when the war broke out, and over time they have been distributed to different Salesian oratories – in Zilina, Hody, and Bratislava. During the Christmas vacations, the children were picked up from their various presences and were taken on a ski vacation, to experience moments all together again, having fun together with their educators and the Salesians who welcome them.

During this winter and Christmas season, many volunteers and Salesians who normally carry on the activities of the oratories also decided to spend the holiday season together with the Ukrainian families welcomed. “In some centers for the little ones, St. Nicholas also came by to bring some gifts, while festive dinners and refreshments were offered to all, sharing the different traditions and customs, both in cooking and in the festivities,” testify the Salesians from Slovakia.

In addition, Salesians and volunteers also continue their service of animating afternoon activities at a number of state facilities housing hundreds of young Ukrainian refugees. They conduct dance, music, language, and creative classes there. “In addition to continuing these activities, our goal for this new year is to include liturgy in the Greek Catholic rite in our visits. We have set up a room to be able to offer them a moment of silence, to take care of the spiritual part,” they add further.

Finally, humanitarian aid to the needy people left in Ukraine also continued at the same pace: in fact, on the occasion of the episcopal consecration of the new auxiliary bishop of Donetsk, Salesian Maksym Ryabukha, on December 22, the Slovak Salesian delegation present at the ceremony, composed of Fr. Peter Jacko and Fr. Andrej Knaze, immediately thought of paying homage to the newly appointed prelate by donating to him a load of humanitarian aid to share with the sheep of his flock: a van full of warm clothes, an electric generator and much more.