Read more
Last News
> Italy – Don Bosco returns to the boys' prison
> Democratic Republic of Congo – Pope Francis recalls: the future is in the hands of young people
> Italy – "Such a big church" for such a "big thing". Card. Parolin at "Don Bosco" in Rome
> Sri Lanka – More than 6,000 people receive rice-meal donation
> Philippines – DBYC-Lawaan Youth Vigil 2023: a time to reflect on decisions opportunities and changes
> Portugal – At work for IX International Congress of Mary Help of Christians: "I will give you the teacher"
> RMG – Canonically erected, new Province of Tanzania (TZA)
> Italy – Meeting of Consultation Body for Missions Sector
> Vatican – Validity of Diocesan Inquiry into Cause of Servant of God Giuseppe Cognata
> RMG – Digital Health: a series of meetings to explore how to educate young people in self-regulation and responsible use of technology

Spain – Rector Major: "You young people are helping us to be who we are" 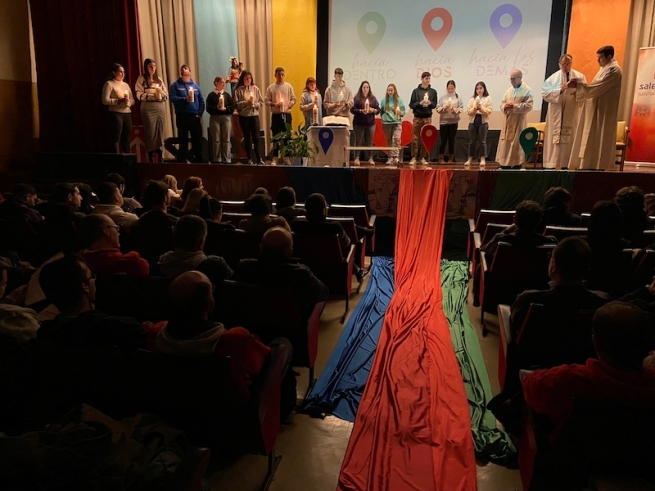 (ANS – Barakaldo) – “You young people are helping us to be who we are.” In this way, the Rector Major of the Salesians, Fr. Ángel Fernández Artime, addressed the approximately 250 young animators of the Youth Centers of the northern area of the Spain-Saint James the Greater (SSM) Province, who met him at the “Nuestra Señora de Begoña” school of the Daughters of Mary Help of Christians on Saturday morning, January 21. In his address, the Rector Major put young people back at the center as the protagonists of Salesian works.

Organized by the Youth Ministry Delegation in collaboration with the Federation of Youth Centers “BoskoTaldea,” the structure of the meeting was in line with this year’s Pastoral Campaign “Let’s Open the Way,” and the young people asked the Rector Major three questions, each of which concerned one of the paths proposed by the campaign: toward others, toward the interiority of self, and toward God. Moreover, three young people, representing all the others, questioned him on the challenges of the pastoral educational mission, how to care for themselves and others, and what was his advice for putting God at the center of their lives.

His answers were peppered with anecdotes from his travels around Salesian presences around the world. He related situations to vital proposals, and thanked the young people present for their involvement.

“I congratulate you because you want to do something for others,” he began. Then, on the question about the educational-pastoral mission, the challenge the Rector Major proposed to them was precisely that of living life as service, as ministry. “Life would change a lot if we thought of living it as service. We have to make sure that our Salesian spaces breathe the culture of service.”

Coming to the second question, he underscored the duty to care for each other, to think together, to seek and share personal and meeting times, to live processes within groups, to discover times of sharing. Then he added, “The challenges for young people today are very clear: to have profound reasons to get up every day with enthusiasm and to transmit hope to other young people because there is a lack of hope in the world.”

Finally, regarding putting God at the center of one’s life, Fr. Artime stressed the great value of personal testimony. “From our faith, we can live by bearing witness with our sympathy, in our welcoming, in our attitude of service, with anyone who comes to our homes, to your youth centers. Without judging, just welcoming.”

He added, “Dear young people, only Don Bosco knew what was going on in his heart, but his work was the fruit of God’s action and the presence of the young people who accompanied him. Each of you must testify that there are many things worth living. And what you do every day is of great value.”

The meeting, which had opened with a moment of prayer, closed with a time of celebration, during which all participants had the opportunity to internalize what they had experienced; and on this occasion, the Rector Major gave a candle to the representatives of each youth center to remind them of their commitment to be “salt and light of the world.”